This is the second of a four-part exploratory data analysis project on an open source parking citation dataset. The project utilizes Python and several of its numerical packages (NumPy, SciPy, Matplotlib, Pandas, GeoPandas). The dataset I used for this EDA is available for free on Kaggle or at the Los Angeles open source data website.

In this post, we’re going to explore the date-time variables associated with this citation dataset. We’ll look into when citations are given throughout the day, week, and year. We’ll also examine revenue trends, and how many citations are issued on special days of the week or year.

We’ll be using numpy, scipy, pandas, and matplotlib in this portion of the EDA.

If you read my previous post, L.A. Parking Citations - EDA Part I, you’ll recall that we broke the dataset up into four parts in order to save easily store it in a repository. Now that we’re looking to work with the dataset once again, we need to combine these pieces back together.

Citations by Day of the Year

Previously, we created the ‘Day of Year’ variable, visible in the above dataset. This variable will be useful in understanding trends in the number of citations issued throughout the year, and will allow us to easily transform the date-time data.

Let’s have a look at this variable now. 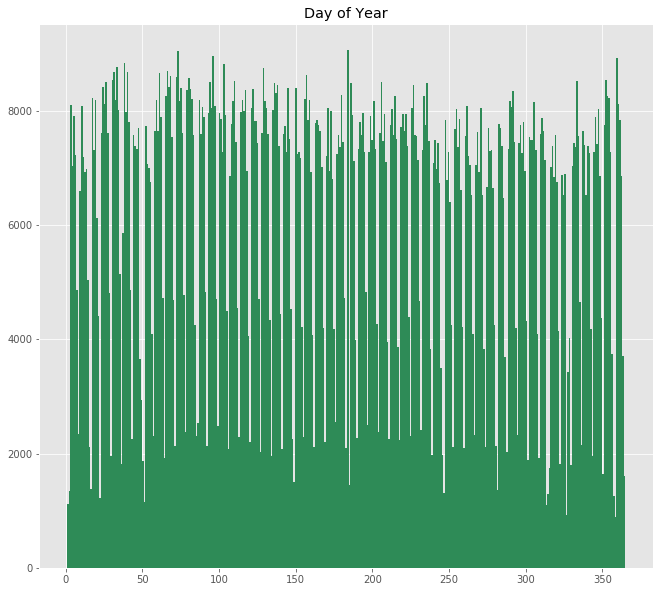 This visualization makes a few things apparent. First, it’s apparent that at least 500 parking citations are given each day. Citations issued max out at around 9000 in a single day. There are three distinct levels of citations being issued. Daily totals cluster at ~2500, ~4000, and ~7500 citations issued.

Let’s see if these clusters hold when we examine how much revenue is generated, each day, on average. To visualize revenue generated, we can sum the ‘Fine amount’ variable as grouped by the day of the year and then create a density plot from this data. 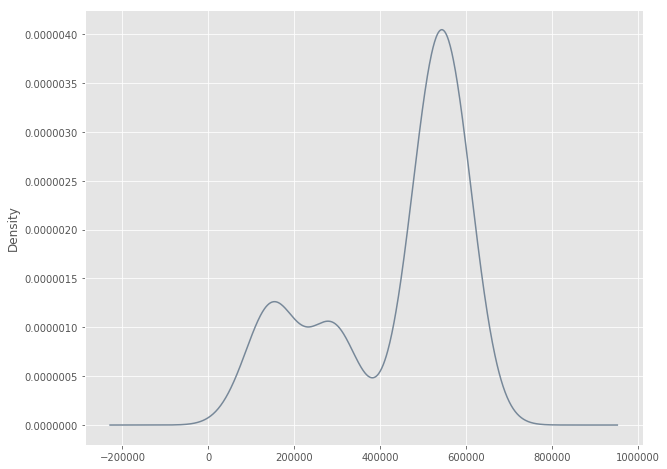 The groupings hold after transforming the data in terms of revenue. We can see three peaks in average daily revenue. A local maximum appears at approximately $175,000, and another at $300,000. These peaks likely correspond to 2500 and 4000 citation groupings. A much larger global maximum arises at just under $600,000$. This corresponds to most frequency grouping of daily citations issued, ~7500.

It’s interesting to see that a typical day will generate between $150000 and $600000 in revenue from parking citations.

Now that we’re sure that there is a discernable pattern in daily citations issued, let’s explore what dictates that pattern. Parking regulations typically change in accordance to the day of the week. For example, many cities have no meter tolls on Sundays. It’s possible that changes in regulation and enforcement throughout the week result in these groupings.

To investigate this hypothesis, we’ll transform and visualize the data in terms of ‘day of the week’.

Citations by Day of the Week

First, we’ll create a dedicated Pandas Series that holds information on parking citations issued per day. That way we don’t have to re-run groupby and count commands each time we want to access data organized in this fashion.

Next, we’ll test out creating a Day of the Week variable on Sunday. The first day of 2017 was a Sunday, so that means that ‘Day of Year’ number 1, 8, 15, … were all Sundays. We can loop through the Series collecting these Sundays and stuffing them into a new variable.

Now to create a general function to apply this process to each day of the week.

Testing the function on Sunday produces the same results as above. Now we can proceed to apply this to each day of the week, creating seven new Pandas Series, then combining them into another DataFrame.

Great, the dataset is now in terms of ‘Day of the Week’. Let’s visualize this transformation. 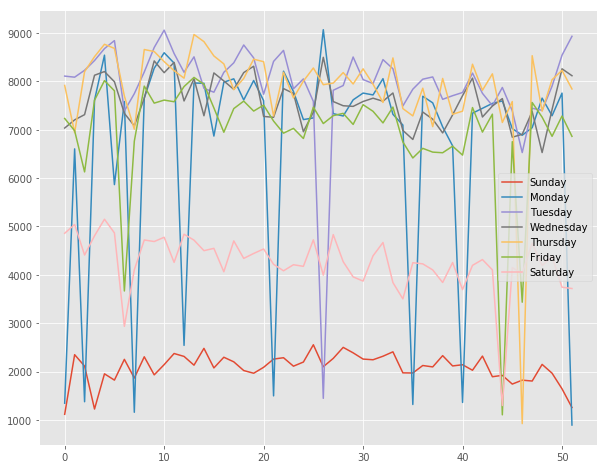 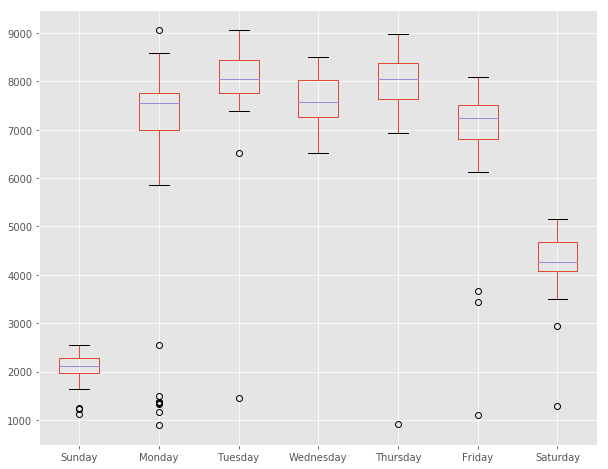 There are many procedures to test if two sample means are significantly different. One of the most straightforward is the t-test. Let’s conduct a two-population t-test on the Sunday and Monday data to be sure that the difference observed in the visualization is statistically significant.

That explains our daily-citation groupings!

Let’s mull over the date-time data from another perspective, and see if we can come up with any more interesting insights.

Tickets issued by month. In the previous data-wrangling post, we created a stand-alone ‘Month’ variable for each citation. Let’s visualize these now and see if there’s anything interesting to look at. 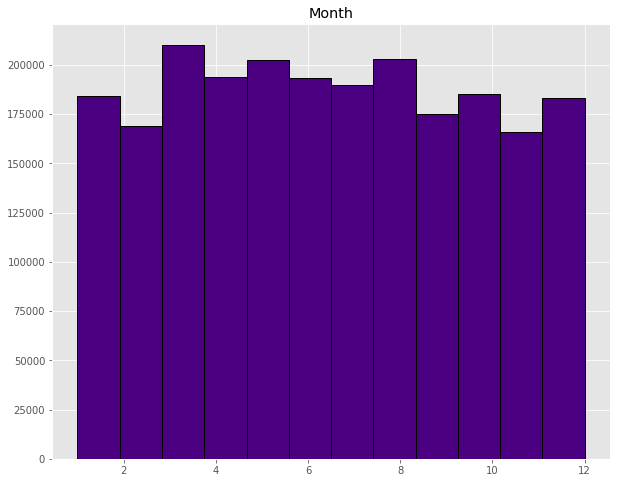 A uniform distribution throughout the year. the effect of a short February is evident in the total tickets issued. It seems that November is also a bit slower of a month. There doesn’t seem to be any pattern to speak of here. How about a pattern within the month? 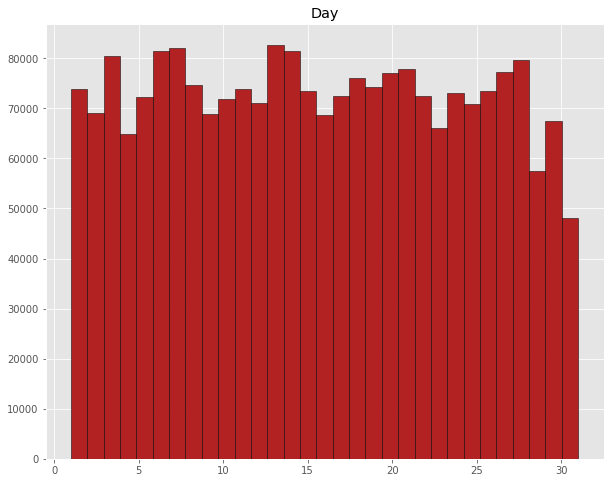 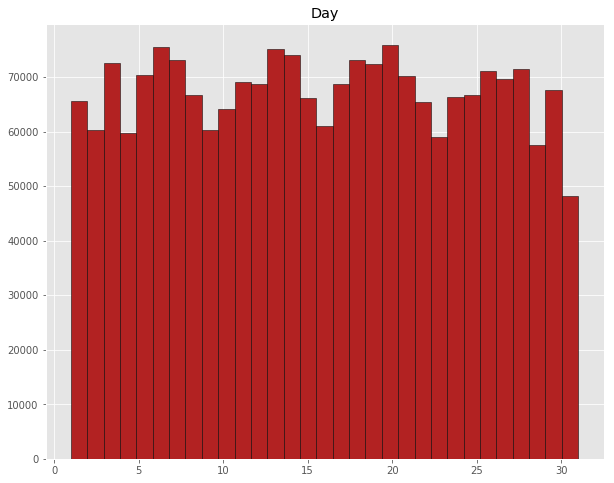 Removing February helps days’ number 29 and 30 close the previously visualized gap. Other than that, there isn’t much of a difference.

When visualizing the time a citation is issued, we can expect to see some big trends. Parking enforcement hours, typically sometime between 8am and 5pm, should see a huge surge in citations. The early morning hours should see barely any citations.

Let’s see what kind of story the data tells us this time. 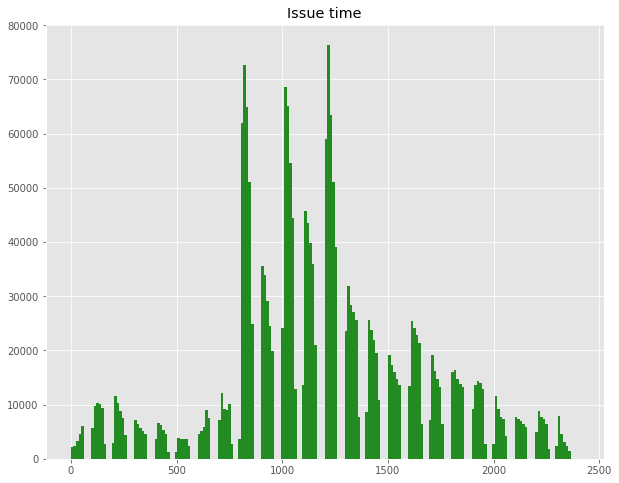 This histogram has been binned into 200 columns. This means that each hour has a six, ten-minute columns, and there are several columns of space between the hours (there is no 10:70 AM).

Like we predicted, there are very few citations issued at 5 AM. A massive spike of citations, from a total of 5000, to over 70,000 occurs early in the 8 o’clock hour. We’ll have to take a closer look at this hour specifically. There’s a lull of enforcement after that, and again a jump at 10 AM.

It would appear that the parking officers get a bit lazy after lunch; citations issued drop by half, and steadily decline thereafter. 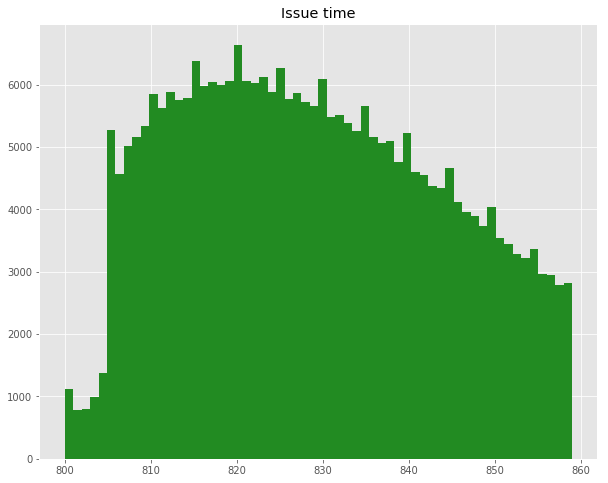 Nearly a 500% increase in citations issued between 8:04 AM and 8:05 AM. Perhaps that 4 minutes is the time it takes the official to track down their first victim after clocking in at 8:00 AM. Either way, it’s handy information to have.

It’s also clear that citations group around the 5 minute interval, suggesting that officers have the ability to round the issue time, and sometimes utilize that liberty. I would have thought an electronic clock would time-stamp each citation, but apparently not.

Finally, let’s separate a number of specific days of the year, and see how many citations are issued on these days as compared to other, ‘normal’ days. I’m talking seeing if parking officers feel the holiday spirit, or do they play the part of the Grinch?

After defining some holidays to consider, I’m going to count the number of tickets given on each of these days, and save the results to a new, ‘holiday_tickets’ Pandas DataFrame.

If that worked correctly, this should give us a bar plot of how many tickets are given on each of the prescribed holidays. 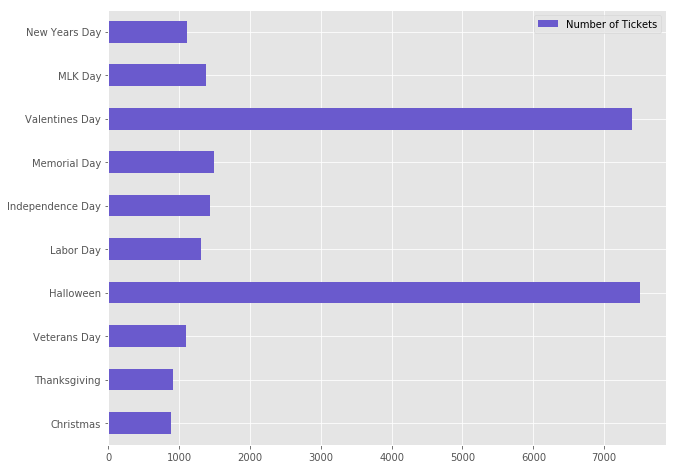 Most holidays have far fewer tickets than the ~6000 citation daily average, That is with the exception of Halloween and Valentine’s day. I would assert that these are not federally recognized holidays, and therefore there is no change in enforcement.

In fact, I don’t believe that parking citation officers are feeling more lenient, they just get the day off!

Christmas turns out to have less citations than any other holiday, is it the least cited day of the entire year?

I guess even the parking Scrooges feel a little bit of Christmas spirit!

In conclusion, you should park in L.A. at 5 AM on Christmas Day, especially if it’s a Sunday. If you park on a illegally on a Tuesday or Thursday at 8:20 AM or 12:10 PM, expect to pay!

You should definitely double check the parking signs between 8 AM and 1 PM on the weekdays, and don’t expect the citation officers to give you a break for Valentine’s Day!

There’s so much information stored in date-time variables, I think that’s what makes them so fun to work with. On the next segment of the L.A. Parking Citation Series, I’ll be considering the spatial variables! Where are citations issued? Where are the most grievous parking meters located?

Perhaps by combining the upcoming spatial analysis and this date-time information, you could piece together a devious plan to avoid those pesky parking citations!